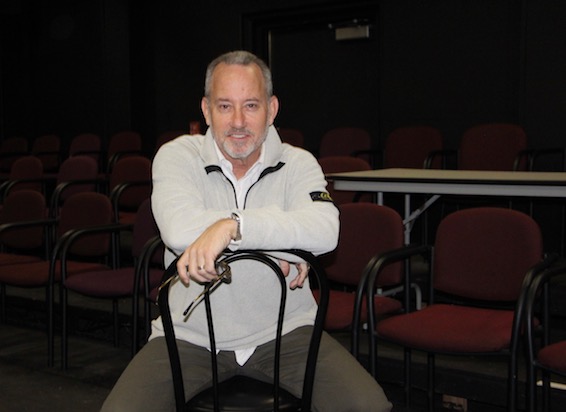 Professor Jim Holmes brings the craft of acting into sharp focus for students with a reel of inspiring acting techniques and insight from decades spent in the Hollywood trenches as a professional actor. Hailing from South Carolina, Holmes equips young thespians with the skills to navigate acting mediums and prepare for their close-up with success.

“Acting has always been the one thing I’ve felt fit my ambitions as an artist and allowed me to express myself,” said Holmes, who received his MFA in Acting from the California Institute of the Arts. “It’s a craft that demands intense study, practice and resilience.”

Turning to the legendary acting techniques of Berghof and Meisner in the classroom, Holmes says his teaching style is rooted in the Socratic Method and laboratory immersion.

“I enjoy taking an immersive approach in my acting classes and having students respond to each other’s work,” he said. “For example, in my audition class I set up mock audition situations where students role play the casting people to provide them with a more realistic experience of the audition process.”

Drawn to the bluff in 2000 to teach a voice-over class, Holmes quickly caught the Lion spirit and has been embodying it ever since. In addition to his slate of Theatre Arts courses, Holmes also routinely directs shows for the College of Communication and Fine Arts, such as the recent production of Moises Kauffman’s “The Laramie Project,” among others.

Moreover, Holmes is no stranger to stage direction; in 1991 he won the Los Angeles Drama Critics Circle Award for Best Direction of David Steen’s “Avenue A.”

This summer, Holmes will lead a course called “Acting for the Camera” as part of LMU’s Summer Programs, a two-week pre-college experience for rising sophomore, junior and senior high school students who are eager to get a sneak-peek of the college experience.

He says the immersive course will teach students how to focus their energy in front of the camera as well as develop a keen awareness of the filmmaking process, including the principles of editing, sound and lighting.

“An actor is dealing with a much smaller frame in film as opposed to on the stage,” Holmes said. “We are going to recreate two complete, produced scenes from recent motion pictures where they will participate as both actors and crew members.”

Students will have daily opportunities to perform on camera, reviews takes and have their work critiqued by peers. By the program’s end, they will come away with a reel of scenes demonstrating the evolution of their on-camera work.

Working consistently in film, television and theatre for the past thirty years, Holmes most recently appeared in such television programs as “The Big Bang Theory,” “NCIS,” “Mom,” “Mad Men,” and “Castle,” among others. Most recently, he was elected to the National Board of the Kennedy Center American College Theater Festival as Vice Chairman of the National Playwriting Program. He received his B.A. in Theatre and Speech from the University of South Carolina.

As for what advice he has for aspiring actors?

“Find material that speaks to you,” Holmes said. “Often young actors find material they like but is not suited to them. The craft requires a lot of thought on the inner-life of a character for it to leap off the page.”

Learn More: Acting for the Camera